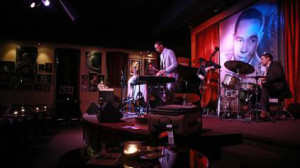 A river of New Orleans jazz music runs deeply through the Marsalis family. From father Ellis through Branford, Wynton, Ellis Jr. and to the cousins beyond, music is the lifeblood that flows through their veins. Little surprise then that Jason, the youngest of the Marsalis family, carries on the proud tradition. Jason Marsalis and the Jason Marsalis Quartet bring their love of all things jazz to Dimitrious’ Jazz Alley Wednesday Nov. 5. One show only, the music begins at 7:30 p.m.

Jason Marsalis has been drumming all his life. In the last 15 years, he added the vibraphone to his repertoire. It is this fusion of percussive sound that he features in his newest album, 21st Century Trad Band. In a live appearance on KPLU’s Studio Sessions, Marsalis was asked about musical influence.

“Well my family first, but I also was strongly impacted by the Afro-Cuban sounds of Abelardo Barroso, Bebo Valdez, and Armando Parazo,” said Marsalis.

When asked about his current album Marsalis said, “People hear ‘Trad Band” and they think that was something from a long time ago. I want to show the people that it’s something that can work today.”

Marsalis’ group includes Austin Johnson (piano) Will Goble (bass) Dave Potter (drums) and Marsalis, concentrating on vibraphone but also taking a turn on the skins himself.

Marsalis’ career was briefly derailed by Hurricane Katrina but has since taken on new life. His 2009 release “Music Update” was his first release as bandleader. The album was Jason’s celebratory response to his family winning the distinguished NEA Jazz Masters Award. Since that time, his career has only flourished. 2013 was a monumental year in which Marsalis released his next recording as a leader on vibes entitled “In a World of Mallets”. The album went to Number 1 on the CMJ Radio Charts and also won an Offbeat Magazine award, a New Orleans music magazine, for best Contemporary Jazz Album.

Marsalis’ fans can expect to hear a wide-ranging eclectic set at Jazz Alley. From the titular track to the off-beat “For the Man With Two Left Feet” the Marsalis Quartet keeps the music humming. Featured are Jazz riffs and signature long pieces that show off the abilities owned by everyone in the group. The show is designed as an homage to jazz, blues, and the myriad music that has shaped Marsalis’ life.

If you think the Marsalis family line ended with trumpeter Wynton and saxophonist Branford, you’re wrong because vibe play Jason Marsalis – the youngest sibling – has just released his second Vibes Quartet recording, The 21st Century Trad Band, on Basin Street Records. It’s the follow up to 2013’s In a World of Mallets, which made it to number 1 on the JazzWeek radio charts. This new effort continues the collaboration between Marsalis and his band, which includes Will Goble on bass, Austin Johnson on piano and David Potter at the drums.

The album includes tracks like “Offbeat Personality,” which features a complex arrangement that mixes hard-swinging with melodic segments, as well as a few unexpected turn-arounds and a quiet intro. “The Man with Two Left Feet,” on the other hand, matches traditional jazz elements with a more contemporary feel. It shows what happens when a band is able to log many miles and years together prior to recording together.

Marsalis incorporates a wide variety of instruments on this release, including marimba, glockenspiel, tubular bells (remember The Exorcist theme?), vibraphone and xylophone. One track is even a bit of an off-kilter blues workout called “Discipline Meets the Offbeat One.”

This album once again includes compositions from Marsalis’ band mates, but also features some works by fellow New Orleans musicians. For instance, Cliff Hines’s “Interzone” is included, as is Jason Weaver’s “Blues for Now.” Both men are graduates of the New Orleans Center for Creative Arts.

Marsalis also gets a little social/political on one track, “BP Shakedown,” which is obviously inspired by the BP oil spill. A further sonic exploration is “Nights in Brooklyn,” which takes on film noire sounds.

Marsalis has already received high praise from other respected musicians. Banjoist Bela Fleck, for example, noted Marsalis’ “brilliant ideas that sound as if he’s played them his whole life, but are really coming off the top of his head.”

Although trumpeter Wynton is the most famous member of the family, his father, Ellis, is also a respected play. Brother Delfeayo Marasalis is a trombone player and producer. Wynton is a teacher and music educator, in addition to a composer and player. Anybody that’s ever seen him perform live has experienced his teaching skills — he loves to talk jazz history. He is also Artistic Director of the Jazz at Lincoln Center in New York City. Over the years, he’s won nine Grammys – in both jazz and classical music. In fact, one of his recordings was awarded a Pulitzer Prize, the first of its kind. Now, Jason is making a bold entry into this amazing family tradition.

by William Ruben Helms
The Joy of Violent Movement
September 24, 2014

There are certain artists who are immediately synonymous with a particular location. You think of Bruce Springsteen, you immediately think of New Jersey, and of the venerable, Stone Pony in Asbury Park, NJ; The Ramones, The Talking Heads, Television and Blondie should bring to mind the grittiness of the old, Lower East Side and of CBGB’s; Nirvana, Pearl Jam, Soundgarden and Mudhoney should bring to mind 1980s and 1990s Seattle, WA; and as soon as you think of the venerable Marsalis clan, you should immediately think of New Orleans.

Certainly, if you know anything about anything about jazz — hell, about music over the past 50-60 years or so — you know that the Marsalis family have made a tremendous impact on jazz and on music. Patriarch, Ellis Marsalis is a legendary pianist and educator; Branford Marsalis is a world-renowned saxophonist who has not only played alongside Sting, but has long been known as a forward-thinking and brash giant of contemporary jazz; Wynton Marsalis has made a name for himself for his attempts at preserving and honoring jazz’s tremendous history; Delfeayo Marsalis is a renowned trumpeter; and the youngest of the clan, Jason Marsalis has toured with Bela Fleck and pianist Marcus Roberts. (Interestingly, if you consider how both Wynton and Bradford Marsalis come off in interviews and in public appearances, you’d think that Wynton was the eldest of the the incredibly talented family — wrong. It’s actually Bradford. You can use that bit in a trivia night, if it comes up.)

With the release of Jason Marsalis’s third album In a World of Mallets the youngest of the Marsalis clan returned to his role as composer and bandleader — and it served as the debut of the Jason Marsalis Vibes Quartet, featuring Will Goble (bass), Austin Johnson (piano) and David Potter (drums). And what made that album interesting was that the album’s material was comprised of incredibly complex but playfully witty compositions which managed to twist, turn, dart, flit about and play with pauses, time signature changes and key changes in ways that put a modern twist on classic jazz.

Basin Street Records will be releasing the second Jason Marsalis Vibes Quartet album, The 21st Century Trad Band on October 27, and with the release of the album’s first single, album title track, “The 21st Century Trad Band,” the album will continue to cement Marsalis’s reputation for playfully witty compositions that manage to be dense, complex and yet incredibly accessible. At one point, you’ll hear Marsalis playing the melody for “When the Saints Come Marchin’ In” for a few bars — right in the middle of the song that really swings and bobs with a sweet, amiable charm.